Aloha. There were chickens. Chickens and roosters everywhere. From gas stations to restaurants, these feathered birds roamed freely and would walk up to you for food. I also saw wild cats running across the street to ones living in the state park by the beach cozying up to humans for food.

There were more white people than expected and I don’t mean tourists, though there were lots of those. Many older retirees reside here. We met a man by the beach with two friendly pups who retired 20 years ago when he was 50. This man still looks 50. Flabbergasting. Inspiring. We saw a lot of young homeless/roofless white people. Mostly the whites here were the entrepreneurs with progressive businesses like the guy who makes vegan desserts from breadfruit aka ulu. Most of the street vendors were whites, including when we stopped at the farmer’s market where 7 of the 8 vendors were white selling homemade coconut milk, coconut bacon, fruits, and essential oils. The 8th was a Japanese woman selling pastries. Why am I mentioning white people? And so early in the post? Don’t I want white folks to keep reading?

I was expecting to see more locals for one. Second, there’s a frustrated part of me that thinks their ancestors were the white destroyers who ruined lives and now we’re in the age of the white saviors who are putting a spin on what remains of other people’s culture. I don’t mean just in America (I function that Hawaii is a country, not a state). I’m quite torn about this perspective. It sounds blame-y. It’s laced with envy. The guy who is using breadfruit as a dessert deeply saddens me not just because he’s white, but because deep down I wonder, why didn’t any natives think of it? It’s popular in Jamaica, too. Why didn’t any Jamaicans or even I think of it? Am I salty? As salty as these gorgeous oceans, yeah! Jealous. Frustrated. Thinking it has to do with the perpetual slave mentality that non whites don’t usually think of creative entrepreneurship in the first place because we’re too busy trying to survive, not thrive. Or maybe some native has thought about it, done it, but it wasn’t about money or making a business out of it. Too many raw feelings about it and I haven’t sorted out a conclusion. More some other time in some other post. On the other hand I was very pleased to see about a handful of dark skinned people every day. I feel like people stared at me because of this rarity. And my partner looks like a local with his Asian based vessel. Many thought he was.

Shifting the tone, I gotta say it’s so picturesque here. The various blues are expressively seductive. Blue sky on blue beach porn. My eyes can’t help but feel robbed of beauty all my life before this. I want to remember everything perfectly in my head because every picture is a disgraceful attempt. Maybe I’m not great at photos or maybe it’s just better with your own eyes. We didn’t take too many pictures to be honest. Most people don’t really look at a scene. They glance, hesitating to take on something so beautiful with their naked eyes. They grab their camera to capture it with the tech’s eyes and memory rather than just be there. I saw a dude in this gorgeous pool of water holding his camera the entire time, telling his family he’s doing it for the selfie. It reminds me of this meme I saw that says, “make sure you’re happy in real life, not just on the internet”. Profound. I’m not judging him. I’m empathetic because I was him, too. Sometimes I still am.

When you go on vacation, there’s lots to do. The first two days were spent driving winding roads, roads I can barely describe, roads that terrified and thrilled me. I’m genuinely surprised there were no accidents. They were narrow. They barely were able to fit two cars 70% of the time. They were 98% winding, deep windings. Half of it had one lane bridges, some of which was hard to see the other side of. If you’re not paying attention, it could get awkward trying to fit two vehicles on a one way. A lot of people get sick on these roads, too. There’s even a tonic for it. It wasn’t bad enough for a tonic for me.

There’s lots to do and see here, but if you want to enjoy your vacation, don’t try to see all the things because that’s site seeing – unless that’s your goal. Pick no more than a handful of things and enjoy the heck out of them. Become an expert at it. It’ll be more enjoyable. It’s okay if you don’t do everything. It’s not about impressing other people about all you did. Your vacation is about you. For example, Hana is the go to thing you “should” do in Maui. I agree, but it’s not a day trip experience if you want to enjoy it to the fullest. 2 to 3 days is best because there’s so much to do and see: waterfalls upon waterfalls, beaches on beaches (black, red, and white sand), and so much more. Some guy saw 43 waterfalls in a day – apparently there are that many – or more? While that sounds like a fun accomplishment, it’s not for me if it’s my first time. I’d rather brag that I saw all of Hana’s stops in 2/3 days and be able to describe them all.

Let’s talk about the food. I wasn’t worried about coming here as a vegan because I could just eat all the fruits and be okay. First of all, every single fruit I ate here was better tasting and cheaper than the states. The avocados were primarily large and organic (if you will) and cheap. So cheap. I also freaked out a lot when I ate them because the taste was consistently superior than what I’m used to. People in the states are getting robbed. And let’s talk about bananas. O. Mah. Gawd. I almost shed actual tears. It was that good. Fruit stands everywhere was very convenient. The most surprising was how many vegan restaurants were here. A lot. I was never that far from one, except when I went through Hana but that’s expected. There was even a vegan ice cream farm! There was also this Whole Foods type of place (they also have Whole Foods here and Costco) with a hot bar and grocery store, but it’s mostly vegan options. Name me one grocery store that’s mostly vegan. I would wait, but I don’t have time. It’s called Mana by Maka or maybe it’s Maka by Mana.

Okay, real quick: I haven’t been listing many names of places because we went into this trip without plans. I was too busy enjoying shit to keep track of what’s what. We didn’t even plan our flight. I booked it a day before, but we did reserve a car ahead of time. Otherwise we took it day by day, which isn’t quite my style, but I got used to it, slowly, painfully at times. Camping here was a little shifty because they go on about permits like it’s a level one threat. We slept in our car three of four nights. It was a little uncomfortable because of the hump where the seats go down and the paranoia that we’ll be asked to move or ticketed. One night we tried to stay in a hotel parking lot. We didn’t turn the car off and someone, maybe security, shined a light in the car. Before any confrontation, I drove to the darkest part of a Home Depot parking lot and we slept just fine. We woke up to roosters crowing. The second and third night we slept by this ocean dock, featuring slight paranoia. The fourth night we managed to camp and some guy asked us about permits. We said we didn’t have one but he said we could stay by paying $25. We only had a $50. He had no change. He said it was okay, we could stay. Maybe we were lucky, I don’t know. I was expecting camping to be easy peasy, something we could do anywhere by the beach, but most parks closed at 6pm or so. Again loomed the threat of tickets or being towed. Who knows the truth? I feel it changes depending on the night/place/person enforce the rules. 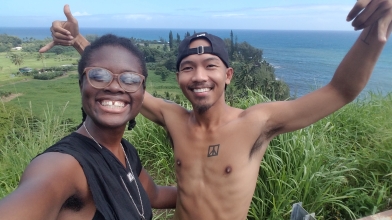 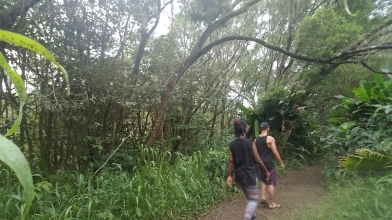 Other random things: we gave a local hitchhiker a ride and she told us about island life. Turns out she’s half Jamaican. Did I mention all the chickens everywhere? And so many birds who always flew away last minute from the road was intense. The weather was always great. A little chilly in the night and morning of course. I don’t know how to swim, pretty scared about it actually, but I got a flotation device and did a little summin’ summin’. We also drove up a crater and it was very high and I was very scared again, but I’m glad I did it because it was breathtakingly gorgeous. I also tried Maui Wowie. It was a good strain. The speed limit average here is 35-45 mph mostly because of the winding roads. The road to Hana may be about 50 miles, but it will take over 2 hours to drive (without stopping or traffic) as you’ll be averaging about 10-20 mph. Overall, Maui was wonderful! I’d recommend a visit, planned or unplanned. Off we go to Honolulu! There are also two actual birds in this airport right now. Mahalo!